Genie's kids - October 2010
On Halloween (October 31) in 2010, Genie gave birth to twins. Instead of carving a pumpkin that evening, we watched the birth of the first kids born on Trevathan Goat: a boy and a girl, aptly named Jack and Punkin, respectively. 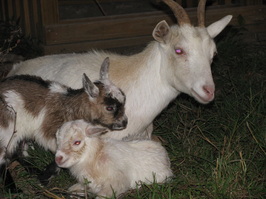